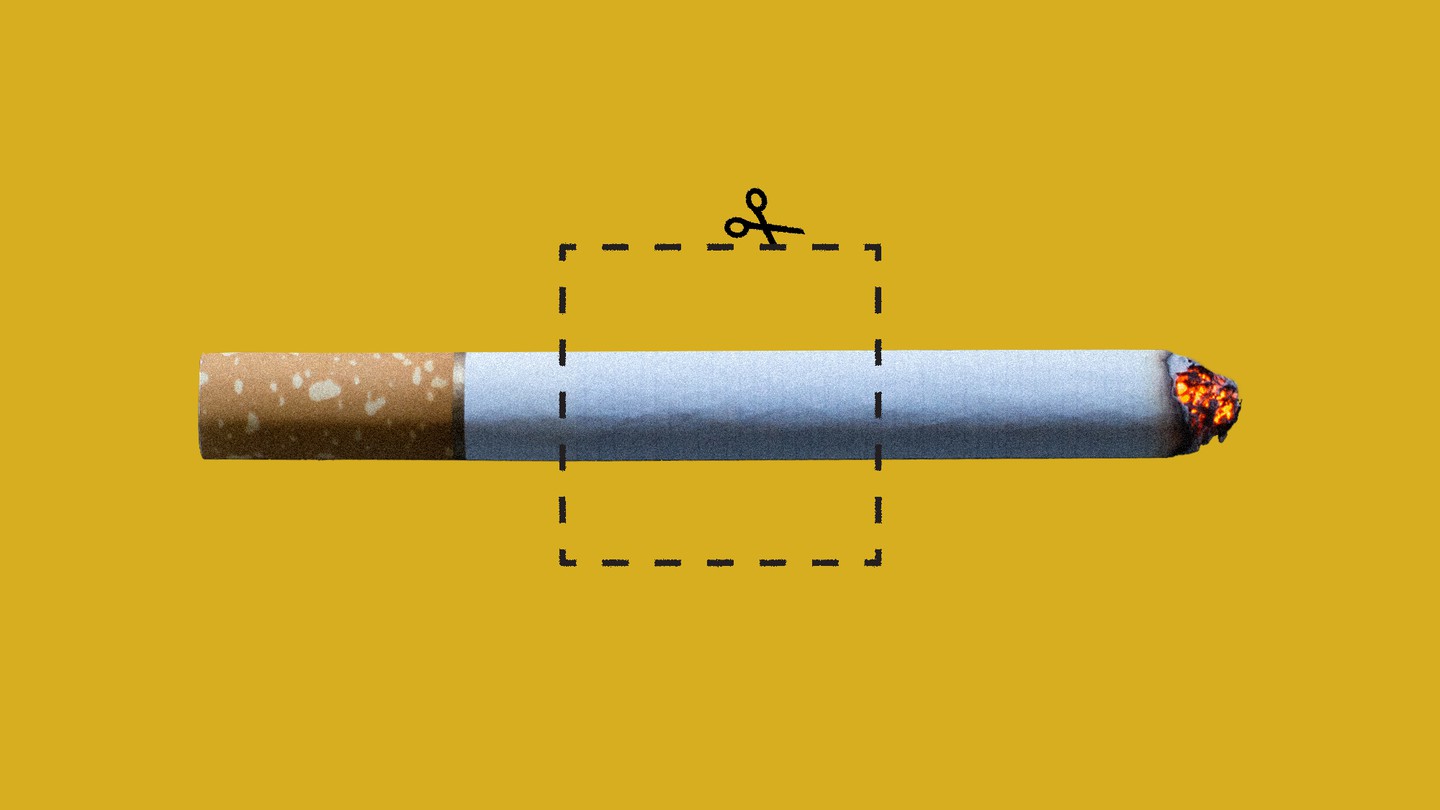 There’s an on-the-shelf policy the Biden administration could enact unilaterally that would save millions of American lives, without costing the government a single cent on the net.

That policy, one pushed for but never implemented by the Trump administration, is eliminating most nicotine from tobacco products. It would not render cigarettes illegal; they would still be available to adults, and the smoking experience would remain much the same. But the product would no longer be so addictive. Researchers have estimated that this policy change would enable 5 million adult smokers to quit within a year. The share of adults who smoke regularly would drop from roughly 15 percent to just 1 percent; 33 million fewer people would become smokers by the end of the century. It would save 8.5 million lives by 2100, at little public cost.

Your guide to life on a warming planet

Read: Contesting the science of smoking

“I am always a bit suspicious of silver bullets in public health,” Michael Fiore, one of the country’s leading experts on tobacco use and smoking cessation, told me. “Things are rarely silver bullets. But reducing the nicotine in cigarettes to near-zero is as close to a silver bullet as you get.”

He’s right, and there’s nothing I know of in public policy remotely like it. Changing laws, medical advances, and social mores have saved millions of lives by suppressing tobacco use. With nothing more than a few pen strokes and a standard regulatory process, Biden could save millions more.

As smoking has disappeared from television screens, planes, bars and restaurants, and other public spaces, the smoking rate has dropped to a third of its peak of 45 percent in the mid-1950s. The share of high-school students who have smoked a cigarette in the past 30 days is down too, falling from 36 percent in the mid-’90s to just 6 percent today. That latter figure is considered crucial among public-health experts, as most adults who are dependent on cigarettes, and who ultimately die from the habit, start smoking as kids.

Still, smoking remains the leading cause of preventable death in the United States. Thirty-four million American adults smoke. Sixteen million live with a health condition related to the habit, such as lung cancer, emphysema, or heart disease. Half a million die a preventable death each and every year due to their cigarette use. Other effects include lower productivity at work, higher rates of social isolation, and cigarette-induced impoverishment.

Nobody knows this better than smokers themselves, the majority of whom want to quit, sometimes desperately so. Government data show that two in three smokers want to stop. In any given year, 55 percent try to stop. But just 7.5 percent manage to. Hyper-addictive nicotine is a major reason why.

Public-health experts have for decades suggested that the government require cigarette makers to produce products with nonaddictive levels of nicotine. (The American Medical Association started recommending the policy in the ’90s.) The Obama administration took a major step toward that goal in 2009 by giving the FDA the power to regulate nicotine levels in tobacco products. The Trump administration—yes, the Trump administration—took another major step forward in 2018, when it started the rule-making process to ban the sale of cigarettes with addictive levels of nicotine.

Scott Gottlieb, Trump’s former FDA director and arguably the best appointment Trump made, described the effort as a moral imperative. This was one area where this administration—so willing to slash regulations, public-health consequences be damned—went full nanny-state. “No statistical model can truly capture the full impact of this effort—including the joy from years of quality life gained with a loved one, or how much pain and suffering would be avoided for millions of families across the country,” Gottlieb said. “This unprecedented public health opportunity, contrasted against the cost of doing nothing, weighs heavily on me.”

Now it is up to Biden to save millions of lives and billions of dollars, to the detriment of the tobacco industry and few others. He could also enact important complementary policies, mostly without the need for new legislation. Those include banning mint and menthol tobacco products (the Obama administration banned the sale of flavored cigarettes but not menthols, and the Trump administration banned the sale of flavored e-cigarette cartridges but not menthol-flavored ones). “It’s hard to overstate how big a public-health difference [this ban] would make,” Matthew Myers of the Campaign for Tobacco-Free Kids told me, given that most kids prefer flavored products. “You would transform the history of heart disease and cancer in the United States.”

That policy action would have particularly significant health effects for Black Americans, who are less likely to smoke than white Americans but more likely to die from cigarette use. Menthols, which are more toxic and more addictive than unflavored cigarettes, have for decades been marketed aggressively to Black communities, and three in four Black smokers prefer them. The issue is contentious; some Black leaders argue that menthol bans are paternalistic. But many others argue that exempting them from flavor bans has a far worse racial impact.

Fiore pointed to a suite of other policies that could help as well. “Each of these options has a mountain of undisputed evidence saying that they achieve their outcome,” he told me. They include tightening up regulations to ensure that tobacco products aren’t sold to underage people; expanding anti-smoking advertising; enacting comprehensive bans on smoking in public places and on worksites; and making access to cessation tools and treatments universal, simple, and free. “We have to make it as easy to quit smoking as it is to buy a pack of cigarettes at the corner store,” he told me.

Another option is increasing tobacco taxes. Cigarettes remain far cheaper in the United States than in many of our peer countries, due to lower government levies: The average cost for a pack is $15 in the United Kingdom and $25 in Australia, versus $8 here. Higher prices would have a particularly strong effect in discouraging teen use. But one caveat: Low-income Americans are much more likely to smoke than high-income Americans, and low-income smokers often spend large shares of their disposable income on cigarettes. Increasing cigarette taxes is highly regressive, a policy that burdens fragile, impoverished households the most. That’s why policymakers should pair increases in cigarette taxes with other changes—ones that make cigarettes nonaddictive, give support to people who want to quit, and ideally also help alleviate deep poverty too.

This is a public-health crisis of extensive proportions, hiding in plain sight. But Biden has a silver bullet to use.